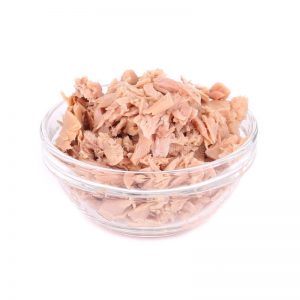 Every college student has lived off canned tuna at some point. It’s cheap, it’s easy to find, and it’s packed with protein. You can layer it on sandwiches, spread it on crackers, and eat it by itself right out of the can. Some brands even sell pre-made tuna salad that makes the perfect midday snack. It might not be the healthiest food in the world, but it’s cheaper than red meat and just as filling. And when you’ve had the chance to try slabs of fresh, hand-grilled tuna, you’ve found that it’s flaky and delicious and brimming with that classic seafood flavor.

Now that you’ve adopted the vegan lifestyle, you know that your tuna fish-eating days are over. But sometimes you crave the taste of flaky canned tuna and homemade tuna salad that always reminds you of summer. You’ve tried vegan alternatives to red meat and enjoyed them, but you’re not sure if it’s possible to recreate that unmistakable fresh seafood flavor. Is there a vegan alternative to tuna that’s light, flaky and full of protein? Or will you have to stick to living vicariously through your non-vegan friends as they eat tuna salad sandwiches at a summertime picnic?

Why Should You Switch to Vegan Tuna?

While the meat and dairy industry have been exposed countless times for their animal cruelty, less attention has been placed on the fishing industry. In fact, some vegetarians include fish in their diets, believing that fish aren’t conscious in the same way as cows and pigs. Unfortunately, this is a lie pushed by the fishing industry. Fish are actually intelligent animals who feel pain, recognize faces, and form social groups. Some fish have even been known to use rudimentary tools. While the life of a single fish might seem insignificant, a fish is just as conscious as any other animal, and kidnapping them from the ocean is an act of cruelty against a real, living creature.

But the fishing industry doesn’t seem to be too concerned, as nearly one trillion fish and mammals are killed every year for their meat, bones, scales and hides. Some fish are swept right from the ocean in massive nets that make the fish panicked and terrified. Countless fish die from stress before they even make it to land. Other fish are raised in marine farms, where they live in cramped, disease-ridden conditions and are brutally murdered when it’s time for slaughter. The fish are chopped, sliced and gutted while they’re still alive, with no stunning or anesthesia. They live nightmarish, miserable lives, and are only freed when they’re finally put to death.

Additionally, eating fish can pose a risk to your own health. Studies have shown that fish contain high levels of mercury, which can harm an unborn child. If you’ve ever wondered why pregnant women are advised not to eat fish, that’s why. Many fish are also contaminated with waste, plastic and toxins, which have been linked to cancer and other diseases. Whether your fish comes from the ocean or a marine farm, you have no idea what you’re exposing yourself to.

What is Vegan Tuna Made Of?

If you’ve ever had tuna salad, you know that a great deal of the flavor comes from the spices and ingredients around the tuna. For this reason, many vegan websites recommend making a homemade vegan “tuna salad” to replicate the taste and texture of real tuna. Most recipes start with a base of chickpeas, then add vegan mayo, spices and chopped vegetables, and finish with a sprinkle of nori flakes to capture that fishy flavor. You can easily make this recipe at home and use it just like traditional tuna salad: spread it over toast, use it as a filling for sandwiches, or scoop it with crackers.

For sushi, some websites recommend cooking up a piece of watermelon or preparing tomatoes for a “tuna steak” that looks just like a piece of red raw tuna. You can also enjoy this fish-free tuna steak on its own if you’re craving the taste and texture of grilled tuna.

Sometimes, you want to skip the homemade recipes and enjoy a pouch of flaky tuna, just like you did before you went vegan. Fortunately, several brands have appeared on the market that offer plant-based tuna in cans and pouches–just like traditional tuna. These products are typically made from soy or pea proteins that are mixed with spices to replicate that fresh tuna flavor. They look just like real tuna and have that same light, flaky texture. If you show it to a non-vegan friend, they probably won’t even be able to tell the difference.

Is a Vegan Substitute for Tuna Just as Good as the Real Thing?

Plant-based tuna is just as good as real tuna, if not better. The mere fact that it’s cruelty-free already makes it much better than traditional tuna products. You can use vegan tuna for salads, sandwiches and snacking, just like you would real tuna, and you can flavor it with the same herbs and spices. The addition of nori flakes can even give it the same fishy flavor.

Plant-based tuna is also much healthier than real tuna. Real tuna is crammed with mercury, which can cause mercury poisoning if eaten in large amounts. Mercury poisoning has been known to cause memory loss, vision loss, numbness, and high blood pressure in adults. Additionally, canned sodium is full of sodium and preservatives, which essentially cancels out any health benefits you might have gotten from eating fish. There’s a reason that canned tuna can sit on a pantry shelf and not go bad for months on end.

Where Can I Find a Vegan Substitute for Tuna?

Plant-based tuna has become so popular that even major retailers have started carrying it. You might be able to find plant-based tuna next to the real tuna in your local grocery store. If you don’t have any luck, try a specialty store or visit the local organic food store. You can also buy plant-based tuna from online retailers and have it shipped right to your house. Cruelty-free tuna is typically affordable–you probably won’t pay more than a dollar or two than you would for real tuna.

Meatless fish was once a rarity in stores, but with the booming popularity of veganism, it’s never been easier to find vegan substitutes on the market. But with so many options, it can be a little overwhelming. Here on our website, we’ve provided a list of some of the best brands of plant-based tuna. These products have been tested by experienced vegans who know what to look for in terms of taste, nutrients and texture. Try these products for yourself and leave a review to let us know what you think.