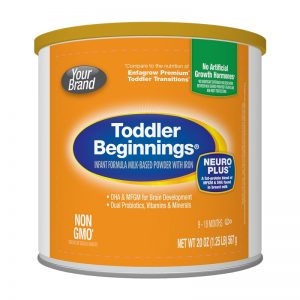 Introducing the first clean label, 100% vegan toddler formula for complete nutrition beyond the first year. Made with real, whole foods and endorsed by leading pediatricians and nutritionists. Meets the nutritional gold standard composition values of breast milk. Else plant-based toddler drink is made of 92% whole plant ingredients (almonds, buckwheat & tapioca) which makes it an ideal solution for plant-based lifestyles and for those avoiding dairy or soy.

Baby’s only organic soy toddler formula soy formula is made with non-GMO ingredients and is the only soy formula on the market that does not contain corn syrup (also known as glucose syrup) as its source of carbohydrate. Nature’s One believes breast milk is the baby’s best organic option. Baby’s Only Organic is intended for a toddler 1-year of age and older or as directed by a healthcare professional. After formula feeding or breast feeding the first year, Baby’s Only Organic formula is a good nutritional choice to assure continuation of strong growth and development.

Your child made it past those scary early months of infancy. They’re starting to walk and crawl and become a little more independent, but you’re not out of the woods yet. Your child is still entirely dependent on you to take care of them. As a parent, you want the best for your kids. You’ve seen toddler formulas recommended on parenting websites and advertised in magazines. They’re supposedly packed with vitamins and minerals, and offer a smooth transition from formula to solid food. If you’ve got a picky eater in the house, this seems like the perfect way to get extra vitamins in your child’s diet.

But while you want your child to be healthy, you won’t want to compromise your vegan lifestyle. You’re committed to raising your daughter or son in a cruelty-free environment that doesn’t feed into the meat or dairy industry. But whenever you read the ingredient label on the back of toddler formula, it seems like every brand is made from powdered milk. Are there any safe vegan toddler formulas out there, or are you stuck trying to cram broccoli puree down your picky eater’s throat?

Are Vegan Formulas Safe For Your Toddler?

Before you start shopping, you might find yourself wondering if vegan formula is safe for your toddler in the first place. You’re committed to maintaining a vegan lifestyle, but not at the expense of your child’s health–and in these formative years, it’s important that your toddler gets all the nutrients they need to grow up big and strong. You’re not a fan of cow’s milk, but it does have a lot of nutrients. Can you get the same vitamins and minerals with a plant-based product?

As Healthy Children points out, plant-based milks can offer fewer energy, calories, fats and proteins than dairy-based milk. Less fat might sound like a good thing, but your child actually needs a certain amount of fat to encourage healthy development. However, this doesn’t mean you should give up and buy a can of dairy-based toddler formula from the store. Plant-based milks contain higher amounts of other nutrients, and everything else your toddler needs will be added into the formula. Vegan formulas are typically enriched with calcium, protein, vitamins, and other nutrients to ensure that your child gets everything they need to grow big and strong.

Why Should I Use Vegan Toddler Formula?

Your child might not be informed about the horrors of the dairy industry, but as a vegan parent, you definitely are. And unfortunately, using a product made from powdered milk is just as harmful as drinking a glass of whole milk. To make powdered milk, the milk from the dairy farm is concentrated and sent to a chamber where the water is evaporated, leaving behind the milk powder. This process might be simple enough, but the original milk wasn’t given to us by happy dairy cows–it was stolen through the cruel, unnatural process of factory farming.

Imagine if you were forced to live your entire life in a cage, crammed in a filthy, pestilence-ridden building with dozens of other humans. You work yourself to death in nightmarish conditions with no vacations or weekends off. When you have a child, the baby is ripped away despite your pleas and you never see it again. And when you’re no longer useful, you don’t exactly get to retire. Instead, you’re shipped to a slaughterhouse where you’re brutally murdered, along with the other members of your peer group.

This might sound like a fictional story, but it’s what dairy cows go through every day. They spend years being tortured and forcibly milked, with no regard to their comfort or safety. These cows have no idea what it’s like to wander the fields, feeling the wind on their faces. They live in constant fear and trauma until they’re finally taken away and butchered in the slaughterhouse. And when they have children, the babies are either fattened and slaughtered for veal, or raised as meat or dairy cattle in the same horrifying conditions. Contrary to popular belief, cows are intelligent animals that are perfectly capable of feeling pain and fear, and they know exactly what’s going on.

It’s true that some farmers allow their cows to happily roam the fields, milking them by hand in safe, comfortable conditions. However, we still don’t have the right to take their milk from them. That milk was produced for their calves, and they never agreed to share it with us. It’s not ethical to steal resources from other living creatures.

What is Vegan Toddler Formula Made From?

If you check the back of the label on both the vegan and non-vegan brands, you’ll see that they look pretty similar: a powder-based formula fortified with vitamins and minerals. But while traditional toddler formula is made from a base of powdered milk, vegan formula is made from a plant-based product like soy protein or pea protein. Some vegan formulas are made from corn syrup to make them sweeter, but you can find options without corn syrup if you prefer. Vegan formulas are fortified with additional nutrients to make them as healthy and filling as their dairy-based counterparts.

Does My Child Need Toddler Formula?

While toddler formula won’t harm your child, most parenting experts agree that your child will do fine without it. However, raising your child on a vegan lifestyle can make it difficult for them to get the necessary nutrients, so a vegan formula can help them get all the vitamins and minerals they need. Just make sure that your child starts eating solid food as well, so they don’t get too attached to formula. If they drink it too often, they might start preferring the sweetened formula over real vegan meals.

Not at all! Plant-based toddler formula doesn’t cost much more than the traditional dairy-based counterparts. You can supplement your child’s diet without running up a huge grocery bill.

Where Can I Find the Best Vegan Toddler Formula?

You might be able to find vegan formula right in your local grocery store. Some major retailers carry non-dairy options for children who have dairy allergies. If you don’t have any luck there, try a baby and toddler store or a health food store.

You can also find a wide range of vegan formula brands online without leaving your couch. Simply do a search online for vegan formula and see what comes up. If you’re not sure where to start, we’ve compiled a list of the best cruelty-free toddler formula brands on the market. We’ve tried these formulas on our little vegan toddlers, and they loved it! Browse the selections, order a few brands, and see which one makes your toddler the happiest. If you sign up for our website, you can vote on the rankings, add reviews, and even add your own favorite brands to the list.