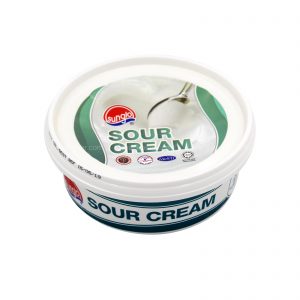 It’s rich, it’s delicious, and you can’t imagine having tacos or chili without it. Sour cream might be fattening, but it also adds the perfect creaminess to hot, spicy dishes that would burn your mouth otherwise. It’s served with nachos and burritos, added to soups like borscht, and used as a base for various dips. Sour cream can even be used in hot dishes like Swedish meatballs and sour cream chicken. You can use it in desserts and add it to scrambled eggs for extra creaminess. It’s cheap, it’s versatile, and there’s nothing “sour” about it–it’s so cool and creamy that you could probably eat it by itself with a spoon.

Now that you’ve adopted the vegan lifestyle, you’ve thrown out the sour cream in your fridge and decline a side of sour cream at Mexican restaurants. But hot, spicy foods don’t taste the same without having a dollop of sour cream to balance it out. And you want to make your favorite dips and sauces again, but so many of them use sour cream as a base that you’ve had to limit your party repertoire. Where can you find a vegan substitute for sour cream that’s as healthy as it is delicious?

How is Traditional Sour Cream Made?

The life cycle of sour cream begins when the thick, dense cream is skimmed off the top of the milk after it rises to the surface. Similar to yogurt, the cream is fermented with a bacteria that gives it the characteristic thick texture and sour flavor. The sour cream is then packaged and shipped to grocery stores and restaurants across the country.

Why Should I Switch to Vegan Sour Cream?

The process of making sour cream might seem harmless. But unfortunately, the cream has a long and bloody history that can be traced all the way back to the dairy farms.

To get the cream, you have to start with dairy milk. And the milk is produced by cramming hundreds of cattle into rows of tiny cages where they’re forcibly milked day after day, year after year. There are no breaks, no vacations–the cows never get the chance to roam the fields and feel the sun on their faces. The cows are forced to start producing milk when they’re as young as two years old. When they’re no longer good for milking–usually around the age of six–they’re shipped off to the slaughterhouse. Cows can live for up to twenty years or more, but the dairy industry tragically cuts their lives short and treats them like milk-producing machines instead of real, living animals.

The cows are forcibly impregnated every nine months to keep them producing milk all year round. Not long after the baby is born, the calf is ripped away from the mother and thrown into cramped, filthy conditions. Some of the cows are raised to be dairy or meat cows, while others are forcibly fattened to be slaughtered and sold as veal. For a dairy cow, her life is an endless cycle of being impregnated and having her babies torn away from her, while her milk is stolen every day for years on end until she’s finally killed and butchered for her meat.

And while it’s true that some cows are raised on ethical farms where they live out their lives happily, it’s still unethical to drink cow’s milk. The cow produced that milk for their babies, not for us; and since animals can’t give us consent, we have no right to take what doesn’t belong to us.

What is Vegan Sour Cream Made From?

Vegan sour cream is so simple and easy to make that you can prepare it at home with only a few ingredients. Most recipes start with a base of raw cashews, which are blended together with other ingredients like lemon juice or apple cider vinegar to get that classic sour cream flavor. Some recipes recommend adding non-dairy yogurt for color and thickness. If you’re not a fan of vegan sour cream with cashews, some recipes are made with a base of soy milk or almond milk.

Is a Vegan Alternative to Sour Cream Just as Good as the Real Thing?

Non-dairy sour cream is just as good as traditional dairy-based products, if not better. It’s thick and creamy and has the same “cooling” sensation that you expect from dairy-based sour cream. Most commercial products are effectively unrecognizable as a non-dairy product–place it on the counter at your next taco night, and your guests probably won’t even notice the difference. The commercial brands are also affordable and should last as long in the fridge as real sour cream. Homemade sour cream has a shorter shelf life, so make sure you use it quickly.

Plant-based sour cream is also much healthier than the dairy version. One serving of milk-based sour cream contains nearly a fifth of your recommended intake of saturated fat for the day. It’s also loaded with calories and contains almost no vitamins or minerals, except for a small amount of potassium. Despite what we’ve been told by the dairy industry, not all milk-based products are good for you.

Conversely, non-dairy sour cream is made from healthy plant-based ingredients like soy, cashews, and coconut oil. Not only are you getting a much lower amount of fat and calories, you’re also getting an extra boost of nutrients from the organic ingredients. And if you make it at home, you know exactly what you’re getting–no harsh chemical additives or dairy hormones. When you eat plant-based sour cream, you won’t feel heavy and sluggish the way you do after eating traditional sour cream. Instead, you’ll feel light and energetic and ready to continue about your day.

How Can I Use Non-Dairy Sour Cream?

Plant-based sour cream can be used in virtually any recipe that calls for the traditional dairy-based version. You can use it as a base for dips and sauces, add it to your nachos, use it in your deviled eggs, stir it into pasta, and drop a dollop on your favorite soups. You can even experiment with different spices and flavorings to alter the flavor of your homemade sour cream. Pair it with chips, cashew cheese, and jackfruit for a plate of vegan nachos, or use it as the base of a vegan ranch dressing dip.

Where Can I Find a Vegan Substitute for Sour Cream?

You might be able to find non-dairy sour cream at your local grocery store. If not, you can search your nearby vegan store or health food store. Most brands can be purchased online directly from the brand’s website. If you’re not quite sure where to start, we’ve gathered a list of the healthiest, most high-quality brands on the market on our website. Browse the selection, order one of your favorites, and let us know what you think! If you sign up for our website, you can even add your favorite brands to the list and rate the brands that have already been added.