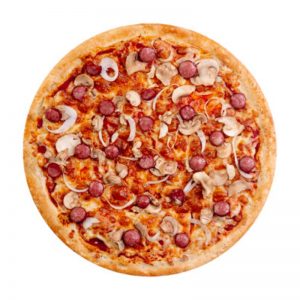 Very tasty vegan pizza, even better with some pineapples on top.

Everyone loves pizza. It’s one of the classic American staples, along with hot dogs and hamburgers. While some love to point out that pizza wasn’t invented in America, the traditional American pizza is nothing like the ones you’d find in Italy. From the St. Louis-style thin-crust pizzas to the Chicago-style deep-dish pies, every region in the U.S. has its own spin on this beloved dish.

And when you think about it, it’s not hard to see why pizza is popular. You take a circle of dough and pile it with all kinds of delicious toppings: meat, cheese, sauce, vegetables of all kinds, and even pineapple if you’re into that. You can build your own pizza and customize it however you want. It’s also cheap and accessible, and you can find frozen pizzas everywhere from gas stations to grocery stores. There’s a pizza place on the corner of every main street in America, making it the first choice for busy parents, hungry partiers, and college kids.

Unfortunately, nothing about the classic American pie is vegan. Some (but not all) pizza crusts are made with egg or milk. After the sauce is applied, the dough is covered in dairy cheese and piled with chunks of real meat. It might be tasty, but it also contributes to some of the most harmful industries on the planet. How can you enjoy a delicious pizza without lining the pockets of people who kill and torture animals on a daily basis?

Why Should You Switch to Vegan Pizza?

Eating a pizza might not seem like the most harmful thing in the world. After all, you’re not buying meat directly from the butcher. The meat on your pizza was bought and processed by another business. But when you buy pizzas that are loaded with meat and dairy, you’re still sending the message that these types of pizzas are desirable and the company should continue making them. And you’re still indirectly contributing to the cruelty of the meat and dairy industry.

Many people have the idea that cows are dumb, simple animals with short lifespans. Nothing is further from the truth. When they’re allowed to live out their natural lifespans, cows can live up to twenty years or more. They can recognize faces, form social groups, and feel fear and pain just like any other living creature. The same is true of pigs, who have been shown to be strikingly intelligent in scientific studies.

But you wouldn’t know it by looking at the dairy industry. These intelligent, social creatures are crammed into filthy pens and forcibly milked for months at a time. They’re forced to undergo painful mutilations without anesthesia, including branding and tail docking. A large percentage of cows are tethered by their necks to restrict movement even further. There are no vacations, no days off; every day is full of fear and agony until they’re finally shipped away to the slaughterhouse.

And the meat industry is no better. According to Peta 99% of farms are considered “factory farms,” making cruelty-free products a rarity. The vast majority of beef, chicken, fish, and pork was produced by confining and torturing animals and killing them in the most brutal ways possible. They’re also crammed full of hormones and antibiotics that can potentially be harmful to humans and genetically modified to make them grow bigger and fatter. When you eat meat, you really have no idea what you’re putting in your mouth.

While some farms claim to offer a cruelty-free alternative to factory farm meat, the truth is, there’s no such thing as “cruelty-free meat.” Even if the animals are allowed to roam happily in the fields, the fact remains that they’re still being slaughtered long before their time. You can’t humanely kill a creature that doesn’t want to die.

What is Vegan Pizza Made From?

Like traditional pizza, plant-based pizza is so versatile that you can do pretty much anything. If you’re making pizza at home, you’ll start with a homemade dough that doesn’t contain eggs or milk. You’ll cover the dough with your favorite sauce, then sprinkle on your favorite toppings: vegan pizza cheese, plant-based meat products, fruits, vegetables, and whatever else sounds tasty. It’s possible to recreate the classic American pizza without using a single meat- or dairy-based product. Vegan alternatives to cheese, bacon, hamburger, and sausage are closer to the real thing than ever, and even non-vegans can’t tell the difference.

If you don’t feel like cooking, there are plenty of vegan frozen pizza brands on the market. These pizzas are made with non-dairy cheese and piled high with fresh roasted vegetables. Some brands take it a step further by adding meatless bacon, sausage or pepperoni. The result is a hot, crispy pizza that sticks to the roof of your mouth just like the real thing.

Is a Vegan Alternative to Pizza Just as Good as the Real Thing?

Plant-based pizza is actually better than a real pizza. When you eat traditional pizza, you’re taking in massive amounts of fat, calories and carbohydrates from the greasy meat and sticky cheese on the pizza. But plant-based pizzas are made from lighter, healthier ingredients like fresh vegetables and non-dairy cheese. You’ll enjoy the delicious taste of pizza without feeling weighted down or bloated, and you’ll have more energy to get through the rest of the day.

A vegan pizza frozen is also healthier than a “normal” frozen pizza. Instead of meat and cheese, it’s typically made with roasted vegetables and plant-based, cruelty-free meat. Frozen pizza might not be the healthiest choice for dinner, but when you go with a vegan option, you know you’re getting a serving of vegetables and none of the fat and grease that’s become a staple of frozen pizzas.

Can I Order a Vegan Pizza at a Restaurant?

Absolutely! While it’s not massively widespread, some pizza chains are starting to offer vegan options. Build-your-own-pizza chains, in particular, are starting to add vegan-friendly toppings to their menu. Most restaurants offer vegetarian pizzas, but unfortunately, the cheese makes them unsuitable for vegans. However, some restaurants are starting to catch onto the popularity of veganism and adding vegan-friendly options to the menu. They’re typically made with products like vegan pizza cheese, vegetables, and plant-based hamburger.

Where Can I Find the Best Vegan Pizza?

You can easily make a pizza yourself using ingredients that you probably have lying around in the fridge already. If there’s a pizza place nearby, they might also have vegan options. But sometimes you don’t feel like cooking or eating out and want to have a stash of frozen pizzas that you can throw in the oven at a moment’s notice.

Most major grocery stores sell at least one brand of cruelty-free pizza. They’re typically located in the same area as the rest of the frozen meals. You can also order plant-based pizzas online and have them shipped to your house. Here on our website, we’ve compiled a list of our favorite vegan pizza frozen brands. We’ve tried these at home and enjoyed them, and we’re confident that you’ll enjoy them, too. Sign up for our website and you can rate our rankings and add your own products and reviews.