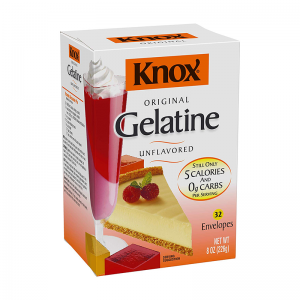 Looking for the best Vegan alternatives to Gelatine. Checkout the list of alternatives based on other people’s recommendations.

Agar (Agar-agar) is a tasteless and odorless substance that is extracted from different types of red algae. The result to be achieved is almost the same as that of gelatine: it binds different ingredients and provides a gel-like structure.

When you think of “gelatin,” you probably think of Jell-O: that sweet, bouncy dessert you had when you were a kid. While Jell-O is the most obvious example, gelatin can actually be found in a wide range of foods, including marshmallows, fruit snacks, pudding, yogurt, sour cream, cheese, frosting, and even ham and certain kinds of soups. Aspic is also a major source of gelatin, although most people haven’t consumed that since the 70s. And due to its hydrating and moisturizing properties, gelatin can even be found in shampoos and cosmetics. Various creams, lotions, soaps, shampoos, and makeup products are all infused with some form of gelatin.

At this point, you might find yourself asking: is gelatin vegan? Everyone has eaten gelatin at some point in their lives, but most of us never thought about where it comes from. Surely it’s some kind of synthesized sugar product that was made in a lab?

What is Gelatin Made Out Of?

In fact, gelatin is a clear, odorless substance that’s made by boiling animal skin, bones, cartilage, and connective tissue. The body parts are typically harvested from pigs, chicken, and cows, but you can even buy gelatin that’s made from fish. And this meat by-product is crammed into foods that seemingly have no connection to the meat industry, like puddings and fruit snacks. In other words, when you eat Jell-O, you’re eating proteins and peptides that were harvested from a cow.

It turns out these supposedly “vegan-friendly” snacks aren’t quite so vegan-friendly after all. But how can you avoid eating gelatin, and where can you go to find a suitable replacement?

Why Should You Switch to Vegan Gelatin?

Gelatin might not seem like one of the cruelest products of the animal industry. If the animals are going to be killed for their meat anyway, why not used the discarded skin and bones? Wouldn’t they otherwise be going to waste? However, gelatin production still accounts for a great deal of animal cruelty. Some gelatin manufacturers own slaughterhouses where animals are killed specifically for their gelatin. While the parts are supposed to be inspected for quality, some factories load it all up into the machine, including the rotting pieces. So when you eat gelatin, you’re not just supporting an industry that kills billions of animals–you’re also risking your own health and well-being.

The animals born into factory farms live their entire lives in tiny, cramped cages that are soiled with grime and feces. Typically, the animals are crammed with antibiotics and growth hormones to make them grow more quickly and reduce the risk of disease. If the animal is a sow or milking cow who was forced to produce offspring, their babies are ripped away from them within a few days and thrown into crates with the rest of the infants. Millions of animals die from stress and disease long before they’re ever taken to the slaughterhouse. And if they do make it to the slaughterhouse, they’re killed in brutal, inhumane ways that often involves them being skinned or boiled alive.

Even the fish industry is rife with cruelty. Fish gelatin is made from boiling fish parts like skin and scales. While fish are intelligent creatures, the fish industry captures them by the millions and stabs, crushes, and slices them to pieces while they’re still alive. Fish gelatin is sometimes marketed as a “better” alternative to red meat-based gelatin, but it’s just as cruel as the traditional products.

What is Vegan Gelatin Made Of?

The most common vegan gelatin substitute is agar agar, an Asian ingredient made from algae. Agar agar offers the same jiggly texture as gelatin, although it tends to be a little firmer. Another common gelatin substitute is carrageenan. Unlike agar agar, carrageenan is actually less firm than gelatin and commonly used in mousses and puddings. Carrageenan is made from seaweed found off the coasts of Ireland.

How Can I Use Vegan Gelatin Products?

If you’re making a gelatin-based dish, your best bet is to buy a gelatin substitute like agar agar or carrageenan. “Official” vegan substitutes are hard to find, and usually consist of flavored gelatin desserts. Fortunately, agar agar can be used in just about any dish that calls for gelatin. You can use it in jellies, gummies, fruit snacks, and even fruit salads. Carrageenan is great for softer desserts like puddings, mousses, custards, and sauces. You can usually replace the gelatin in the recipe with equal parts of the substitute.

If you’d prefer to make a flavored gelatin dessert right out of the box, there are a few vegan Jell-O substitutes on the market. You can make the traditional cubes or pour it into molds to make a festive party dessert.

Where Can I Find a Vegan Alternative to Gelatin?

Agar agar and carrageenan, once practically unheard of in the Western cooking world, have skyrocketed in popularity due to their health benefits and cruelty-free manufacturing. You can easily find agar agar and carrageenan at most online vegan and specialty stores. Some grocery stores have even started stocking these ingredients, so don’t be afraid to take a look if you happen to drop in. If you’re looking for the pre-packaged jellies and fruit snacks, those can be trickier to find, but you’ll probably find them at the local health food store.

Not sure where to start? We’ve got a peer-reviewed list of some of the most high-quality products on the market, right here on our website. Check it out and let us know how your gelatin-based recipes turn out.

What Are the Health Benefits of Gelatin Alternatives?

Unlike traditional gelatin, which offers little in the way of nutrients, vegan alternatives are an easy way to get more nutrients in your diet. Agar agar is a natural source of fiber, calcium, and iron. Agar agar has also been known to cause feelings of “fullness” and satiety, making it a popular weight loss ingredient in Japan. When you include agar agar in your desserts, you’re getting an extra burst of nutrients that you wouldn’t get from a typical sugary dessert.

Like gelatin, carrageenan offers few vitamins and minerals, but it is a good source of soluble fiber. And mass market gelatin products like Simply Delish are typically healthier than their “traditional” counterparts because they’re made from natural ingredients and sweeteners, not artificial chemicals and additives. Long before the vegan lifestyle boom, gelatin substitutes were often marketed as a healthy alternative to Jell-O due to the lower amounts of fat and calories.