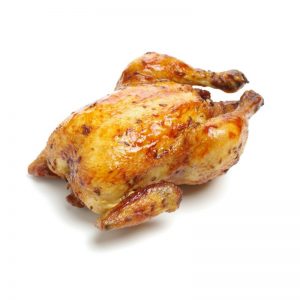 Chicken might not have reached the same popularity heights as pork and beef, but it’s still a staple of American cuisine. Fried chicken can be found in just about every restaurant, with hundreds of chefs adding their own touch to the classic dish. Chicken can be an ingredient in everything from pies to pasta to stir fry, and every child who’s stayed home from school while they’re sick has eaten a bowl of chicken noodle soup. Chicken is also a popular ingredient in Asian dishes–what Chinese buffet would be complete without orange chicken or sesame chicken? It’s tasty, easy to prepare, and frequently touted as a lighter alternative to fattening pork or beef.

Now that you’ve gone vegan, your days of stopping at KFC to get a bucket of chicken wings are over. You’re glad you adopted the vegan lifestyle, but sometimes you dream about having a plate of sizzling fried chicken or a seared grilled chicken breast. Chicken is also one of the cheaper meats in the grocery store, and it was so easy to throw a few frozen pieces in the oven with some vegetables and have dinner ready in a matter of minutes. Is it possible for you to supplement your meals with a vegan alternative to chicken? Or will the taste of grilled chicken have to become a distant memory?

Why Should You Switch to Cruelty-Free Chicken?

While it’s been less publicized than the meat and dairy industry, the poultry industry is just as horrifying. Billions of chickens are slaughtered in the U.S. alone every year. The chickens are raised in tiny windowless cages, where they’re crammed with drugs and growth hormones to make them as fat as possible. Often the chickens die before they even reach the slaughterhouse due to complications from their rapid, unnatural growth. The surviving chickens are crammed into crates like inanimate objects and shipped off to the slaughterhouse, the handlers often breaking several of their bones along the way.

When they arrive, the chickens are hung upside down and stunned to prepare them for slaughter. Their throats are slit before they’re dropped in boiling water to remove their feathers. Many chickens are conscious during this entire process. Once they’re dead, they’re butchered and packaged while the next generation of chickens are raised back at the factory farms, suffering and being primed for slaughter.

Eating chicken also poses several health risks. As factory-raised chickens are crammed with growth hormones and antibiotics, the chicken on your plate is probably full of artificial chemicals. The effects of growth hormones are still being studied, but they’ve been known to cause adverse effects in humans, including tumor growth. And while chicken’s often marketed as a healthy alternative to beef, chicken is still loaded with fat and cholesterol. One serving of chicken gives you half of the recommended amount of cholesterol you should consume in a day.

What Kinds of Plant-Based Chicken Products are Available on the Market?

Unlike some vegan meat alternatives, the vegan chicken market is so diverse that there’s a vegan alternative to just about everything. You can buy vegan chicken strips, nuggets, patties, drumsticks, roasts, buffalo wings, barbecue wings, and even orange chicken. The products are shaped, fried, and seasoned just like traditional chicken products, but without the animal cruelty. You can buy strips and pieces to use in recipes, or fully-cooked sandwiches and wings to enjoy by themselves.

What is Vegan Chicken Made From?

Most major brands start with a base of soy or wheat, with other natural ingredients added to replicate the classic chicken flavor. Some brands are made from seitan, a popular meat substitute that’s made from wheat gluten. Other brands use a mixture of vegetables to create a healthy, nutritious chicken substitute. Unlike traditional chicken products, which are usually full of chemicals and additives, cruelty-free chicken is made from all-natural ingredients and flavorings.

If you want to challenge yourself, try making cruelty-free chicken at home. Most recipes recommend using a base of tofu or seitan. Nutritional yeast is usually added to make the dish more savory. Add your favorite chicken seasoning, and fry or grill it up just like you would a regular piece of chicken. You can even add hot sauce or barbecue sauce for a spicy backyard party appetizer. Try serving it to your friends or family members and see if they notice the difference.

Does Plant-Based Chicken Compare to the Real Thing?

Making plants taste like chicken might seem like an impossible feat, but plant-based chicken is just as hearty, juicy, and flavorful as the traditional meat-based version. Many cruelty-free vegan products have been fried or battered to give them that perfect fried chicken texture. And the “plain” products are still flaky, dripping with juice, and ready to be served as a main course or used as an ingredient in your favorite dishes. You can grill it, sear it, fry it, or bake it and have a delicious chicken dinner that’s much healthier than the real thing. You won’t feel “heavy” after eating it, the way you do after eating cholesterol-filled meats. And you won’t have any bones to remove and throw away, either.

A vegan substitute for chicken usually doesn’t cost much more than a package of raw chicken pieces. The products usually retail for no more than ten or fifteen dollars. Some brands even offer an entire vegan “chicken” for less than twelve dollars. Instead of eating out at the local fried chicken joint, you can buy a resealable bag of vegan wings, store in the freezer, and have dinner every night for a much cheaper price.

While vegan meals were once a rarity in restaurants, an increased number of restaurants have begun offering dishes with plant-based chicken. You’ll have to do some digging, but the local vegan restaurant in your area probably offers a chicken substitute. You might also find one or two options at a “traditional” restaurant. Even some major chain stores have started selling veggie-based alternatives to their popular chicken sandwiches. Plant-based chicken hasn’t taken off as much as plant-based beef, but it’s gradually becoming a viable option in the restaurant world.

Where Can I Find Cruelty-Free Chicken Products?

You can often find cruelty-free chicken products right in your local grocery store. They’re typically located in the freezer area, with some stores offering an entire section of plant-based products. Quorn, Gardein, and MorningStar are all popular brands that can be found in major grocery store chains. Some specialty stores carry more exclusive products that are made with tofu or seitan. If you want to try making it yourself, you’ll probably have to go to a vegan or health food store for the more specific ingredients like nutritional yeast.

You can also find a whole spectrum of vegan products right here online, with several brands offering shipment directly to your house. Not sure where to begin? We’ve got a full list of vegan products that have been tried and reviewed by vegans just like yourself. And if you see something that’s missing, you can add a recommendation or two of your own.