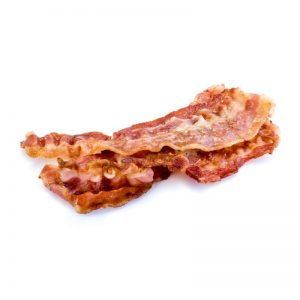 Smoky Maple Bacon Tempeh strips bring you a tasty and nutritious way to enjoy the flavor you love without the cruelty! Enjoy it on a TLT (tempeh, lettuce and tomato), in a scrumptious club sandwich, sprinkled in bits over your favorite salad, or as a quick and hearty breakfast dish.

Cook it a little or cook it a lot (for you extra crispy vegan Bacon lovers). This smoky seitan makes a great BLT, salad or pizza topping, or enjoy it as a side. Can be baked into your favorite recipes, or for best results pan fry with a small amount of oil. If frozen, run package under cold water for 10 minutes or move to fridge 24 hours before cooking to thaw.

Serve it up for breakfast or top it on a burger, Smart Bacon® brings that crispy, smoky taste to every bite. But unlike traditional bacon, Smart Bacon® is plant-based and better for you, so go ahead and feel good about your choices.

Smoky, saucy and savory, this all-natural vegan bacon alternative from Sweet Earth is made with non-GMO ingredients and has 10g of protein per serving!  With 57% fewer calories and 75% less fat than pork bacon, this awesome breakfast meat alternative is full of flavor and has an awesome texture that goes great as a breakfast side, works well on your vegan BLTs, or can be used for toppings or appetizers as well.

If you asked ten vegans which “traditional” foods were the hardest to give up, there’s a good chance that bacon would be at the top of everyone’s list. Everyone loves bacon. It’s crisp, crunchy, and marbled with fat, and it’s the perfect complement to your toast and coffee in the morning. It’s found in a wide range of foods, from salads to pizzas to BLTs. You can buy chocolate-covered bacon at certain luxury gift stores. And bacon jerky has even managed to break into the artisanal food market, with exotic flavors like sriracha and Korean barbecue.

In other words, bacon is a staple of American cuisine. And when you vegan, you’ll have to give it up. You know it’s for the best, as bacon is loaded with grease and calories and robs you of your energy for the rest of the day. Even if you’re not going vegan for health reasons, you know you’ll feel lighter and healthier once you stop consuming these crispy pieces of fried pork fat. But when you need to get your bacon fix, are there any healthy vegan alternatives that compare to a sizzling piece of bacon? Or will the “bacon side” of your plate forever remain empty?

Why Should You Switch to Vegan Bacon?

What most of us don’t see when we throw a piece of bacon in the frying pan is all animal suffering and cruelty that happened miles away at the slaughterhouse. Mother pigs spend most of their lives in cramped, filthy crates where they’re forcibly impregnated for three or four years until they’re deemed useless and shipped away for slaughter. Their piglets are ripped away from them and thrown into dirty pens and crates, where they’re force-fed until they’re fat enough to be slaughtered for meat. To keep the piglets from attacking each other, farmers frequently break off the sharp ends of their teeth. Hundreds of piglets die from the stress alone before they’re ever shipped off to a slaughterhouse.

The surviving pigs are transported to slaughterhouses in cramped trucks that stress and frighten the animals. Once they’ve arrived, the pigs are jabbed with electric pods to keep them moving through the line. While the pigs are supposed to be stunned before they’re killed, most of the pigs are stunned improperly, resulting in them being skinned and burned alive. Some bacon does come from ethical, environmentally-friendly farms where the animals are treated well, but the vast majority of bacon comes from these horrifying factory farms.

And if you’re worried about your own health, bacon is one of the fattiest parts of the pig, with a single slice containing 160 calories. Bacon is also loaded with sodium and carbohydrates, and it adds a heaping dose of cholesterol to your diet. Bacon does have some protein, but you can easily get more protein from much healthier sources. Once you’ve eliminated bacon from your plate, you’ll find that your breakfasts are a much healthier way to start your day.

What is Vegan Bacon Made Of?

A common vegan alternative to bacon is seitan, which is a meat substitute made from wheat gluten. Seitan has a savory flavor and a texture that’s similar to meat products. You can throw it on the frying pan or toss it on the grill just like you would with pork bacon. With a mild flavor palate, you can extra ingredients like maple syrup or liquid smoke to give it your favorite “bacon-y” taste.

If you’re on a gluten-free diet or don’t like the taste of seitan, vegan bacon tempeh is another way you can spice up your morning fry-ups. Tempeh is a fermented soy product that can be sliced and soaked in marinade to replicate that smoky bacon flavor. Like bacon, tempeh is a good source of protein; unlike bacon, it’s free of harmful fats and cholesterol. Slap it on your BLT sandwich, layer it over toast, or serve it by itself as a mid-morning snack.

A less common but still delicious option is tofu bacon. Tofu is essentially a blank slate that allows you to add whatever flavors you want: smoky, meaty, savory, spicy. If you’ve got a package of tofu lying around in your fridge, try slicing it into thin pieces, soaking it in a savory marinade, and frying it up the way you would traditional bacon. It might not look exactly like “real” bacon, but it’s crispy, chewy, and packed with protein.

Can I Still Have Vegan Bacon Bits and Crumbles?

If you’re a fan of using bacon bits and crumbles in your cooking, never fear–you can still enjoy all that crunchy, savory goodness. You can make your own imitation bacon bits using textured vegetable protein (TVP) or buy a package from a vegan retailer. Incidentally, many non-vegan brands carry imitation bacon bits because they’re easier to manufacture than real bacon bits.

Where Can I Find A Vegan Bacon Substitute?

With imitation bacon being one of the most common vegan products, you’ll probably be able to find it at your local grocery store. If you don’t have any luck, try a health food store or specialty food store. Vegan bacon is popular with consumers not only because it’s vegan-friendly, but because it’s recommended for people trying to reduce the amount of fat and calories in their diet.

If you’d prefer to shop online, there are hundreds of vegan food stores that offer their own take on cruelty-free bacon. Some stick to the traditional recipes, while others sell unique flavors like smoky maple and sage hickory. You can even buy vegan Canadian bacon from some retailers. Not sure where to start? Check out the handy list on our website for some of the best vegan brands in the industry!

You can also make cruelty-free bacon at home using a base of seitan, tofu, or tempeh. Typically, the base ingredient is marinaded in a flavor mixture before being tossed in the frying pan. You can buy these ingredients online or at your nearby health food store.

Imitation bacon is just as savory, crispy, crunchy, and delicious as the traditional pork bacon that you’re used to. Your vegan bacon slices will pop and crackle in the pan while they’re frying, and leave a delicious puddle of grease you can fry your vegan scrambled eggs in. Even non-vegans can appreciate the distinct taste and texture of plant-based bacon. You can eat it whole or use it in all your favorite recipes: sandwiches, pastas, pizzas, etc.

How Much Does Plant-Based Bacon Cost?

Plant-based bacon shouldn’t cost much more than traditional pork bacon. In fact, it’s become such a staple that it’s typically placed in grocery store freezers next to the real thing. Some of the more “realistic” options might cost a few dollars more, but you won’t break your budget by switching to cruelty-free bacon. If anything, you’ll be getting more nutrients and protein for your money. If you want to save even more money, try buying the base ingredients (tempeh, seitan, sauce ingredients, etc.) and make your own cruelty-free bacon for a fraction of the price. Plus, it’s a great opportunity to polish your vegan cooking skills.