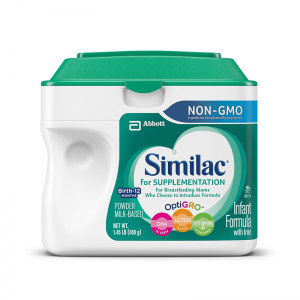 Bebe Latte is a plant-based drink introduced to the market to meet the specific needs of babies. This plant-based drink provides babies with their daily intake of nutrients and vitamins essential for their development. Many parents will be delighted to discover a whole plant-based drink that’s a healthy and dairy product alternative. Bebe Latte includes a specific blend of vitamins and minerals that serves as the perfect complement to the nutrition of babies and ensures they grow up healthy.

The 100% plan based baby formulas from the French producer Bébé M are suitable for babies from 0 to 3 years. The product is Dairy-free, Soy-free, Gluten-free, and Palm oil-free. Amazing!

Introducing the first clean label, 100% vegan toddler formula for complete nutrition beyond the first year. Made with real, whole foods and endorsed by leading pediatricians and nutritionists. Meets the nutritional gold standard composition values of breast milk. Else plant-based toddler drink is made of 92% whole plant ingredients (almonds, buckwheat & tapioca) which makes it an ideal solution for plant-based lifestyles and for those avoiding dairy or soy.

EleCare is a nutritionally complete amino acid-based formula for infants who cannot tolerate intact or hydrolyzed protein. It’s hypoallergenic and clinically shown to support the growth of exclusively formula-fed infants. Has 100% free amino acids as the protein source, and has DHA/ARA, nutrients that help support brain and eye development. Does not contain milk protein, soy protein, fructose, galactose, lactose, or gluten.

Modeled after the complete nutrition & gentleness of breastmilk, this Plant Based Protein & Lactose Free formula is designed for babies who need non dairy milk solutions. This lactose free formula provides plant based protein along with Calcium & Vitamin D for strong bones & teeth & DHA for brain & eye development. Your baby’s nutritional needs evolve over time; That’s why Gerber created the Good Start line; Made to comfort your baby’s tummy & available in a range of products.

Neocate Infant DHA/ARA is a hypoallergenic, nutritionally-complete, amino acid-based exempt infant formula containing iron and nucleotides Amino acid-based formulas, also known as elemental formulas, are made from individual amino acids instead of whole protein. Amino acids are the most basic form of protein, and are easy for the body to absorb. Neocate Infant DHA/ARA is the only elemental formula that contains nucleotides, which are naturally found in breast milk. Neocate Infant DHA/ARA is also the only hypoallergenic infant formula that does not contain soy oil. All Neocate powdered products are made in a dedicated, 100 percent dairy-free facility. Neocate ingredients are certified by suppliers to be derived from non-genetically modified organisms.

Sprout Organic’s Infant Formula is made with the goodness of organic plants which are a natural source of proteins and antioxidants.

Sprout’s clean and organic ingredients are carefully crafted to support the healthy development of your little one from birth to 12 months of age.

Containing a blend of organic rice and pea protein, Sprout’s Infant Formula is gentle nutrition for little tummies and contains key nutrients for your child to grow up strong, happy and healthy.

Enfamil Nutramigen Colic Baby Formula is a hypoallergenic formula proven to manage colic fast, often within 48 hours. If your baby has an allergy to the cow’s milk protein in infant formula, Nutramigen contains extensively hydrolyzed protein to provide colic relief. The benefits include: Hypoallergenic, easy to digest proteins, proven to promote skin health in infants through 18 months of age, proven to promote digestive system health within 1 week of use, and effectively manages colic in 48 hours. Nutramigen is also nutritionally balanced, lactose free, and has no added sucrose.

Earth’s Best Organic Infant Formulas with DHA & ARA are made with high quality protein, carbohydrates, vitamins, minerals and essential fatty acids including Omega-3 DHA and Omega-6 ARA fatty acids— special nutrients found in breast milk clinically shown to be critical to baby’s mental and visual development. These easy-to-digest organic infant formulas with iron meet all FDA requirements for infant nutrition with the added benefit of being organic. Earth’s Best Organic Infant Formulas with DHA & ARA are specially blended without the use of growth hormones, steroids, antibiotics, dangerous pesticides or synthetic fertilizers. Nutritionally complete, they provide the essential nutrients required by the FDA for infant feeding for babies during the first 12 months of life.

Baby’s only organic soy toddler formula soy formula is made with non-GMO ingredients and is the only soy formula on the market that does not contain corn syrup (also known as glucose syrup) as its source of carbohydrate. Nature’s One believes breast milk is the baby’s best organic option. Baby’s Only Organic is intended for a toddler 1-year of age and older or as directed by a healthcare professional. After formula feeding or breast feeding the first year, Baby’s Only Organic formula is a good nutritional choice to assure continuation of strong growth and development.

Many parents choose to adapt their infant to a vegan diet from birth by opting for a baby formula that has no type of animal base. Unfortunately, in the United States there are no 100% vegan alternatives to baby formula as yet. In Europe there is one that is popular and there are a few that are non-dairy but with a soy-base. This leaves the absolute best alternative to be breastfeeding which is not always a possibility. And the soya options for babies under 6 months have the potential for health effects.

A stark reality that faces vegan parents, due to the nutritional needs of their infants, is that they use a non-vegan formula and then adopt the vegan diet once their child has reached the weaning stage. This is not an option for most. Vegans as a whole eat no type of animal products which means that in addition to meat and seafood, they do not partake in dairy or honey. Raising baby as vegan, brings concern as to whether there will be adequate nutrients particularly protein and iron in the diet since the diet is limited and how it can be supplemented. But it is possible for the baby to be vegan. These nutrients are available if you use a vegan alternative to baby formula or breastfeeding along with a vitamin d supplement.

There are many women who choose not to or who are simply unable to breastfeed. For these women, who may also be vegan, there needs to be options available to them in order to provide a healthy diet that meets baby’s nutritional needs and the parent’s ethical values.

One of the best vegan alternatives to baby formula options that is available for vegan women if breastfeeding is not an option is donor milk. Not everyone is going to have easy access to this choice but it is definitely something to strongly consider if you have an interest in using breast milk.  There are parents of babies who have an excess of their milk supply that donate to other parents where breastfeeding is not an option for themselves. You can go online and search for milk banks in your general location. But it is imperative that you research the supplier and check all of the reviews concerning the company as well as who is providing the milk.

There is a vegan alternative to baby formula available in Europe which can be shipped to North America. The one that is among the most popular, that is deemed vegan-approved and soy-free, is Premiriz infant formula. It is rice-based, organic, and lactose-free.

What To Look For In Non-Dairy Baby Formula?

Options are somewhat limited when it comes to non-dairy baby formula but there may be more being released onto the market in the future. It’s important to check the nutrition label as nutrition is going to be the single most critical aspect of a healthy formula for your baby. The ingredients for a soy formula will most likely contain soy protein, corn syrup or possibly sucrose, vegetable oils, and oftentimes iron. In order to be beneficial to baby’s nerve, brain, and eye health, you will want to purchase a formula that is rich in ARA and DHA omega fatty acids which are resourced through algae.

It’s a good idea to purchase products that have been made within the United States as they are not allowed to be manufactured with any type of melamine in the food products whereas baby formula that has been made in China has been linked to melamine which is a chemical that is used in the making of pesticides, fertilizers, and cleaning products.

You will also want to decide on which type of formula you wish to have for your baby as far as powder, which is the least expensive choice and can be mixed with water. There is also liquid concentrates which come already diluted with water but are generally more costly. And then there are the formulas that are already to use and can be poured right into baby’s bottle, but these tend to be the most expensive.  The type that you use will depend on your family’s lifestyle and budget.

During a baby’s first six months, the infant is only in need of breastmilk or a first infant-type of formula. Breastfeeding is considered to be vegan-friendly and offers many other health benefits for the baby and mom.

If feeding baby formula, it isn’t possible for the diet to be 100% vegan in the beginning. There are no baby formulas in the United States that are 100% vegan with most of the soya-based formulas having Vitamin D in the form of lanolin which is made from sheep’s wool.

Having a concern about animal welfare, you could opt for an organic-type of formula as the organic cows tend to have a higher welfare standard albeit with a higher carbon footprint as well.

If breastmilk will not be an option for you, you will need to be tolerant during the first six months of baby’s life that the infant will be consuming an animal-derived product. Any other vegan milk such as almond, oat, or rice milk, is not going to be suitable for a young baby.

Most of the vegan alternatives to baby formula options are going to be made using soy. It is important to understand that soy formula is not soy milk. Soy milk would in no way be an acceptable substitute for baby formula.

Soy formula has been regulated by the FDA and consists of many essential nutrients required by babies for their healthy growth and development. Because of that, aside from breast milk, formula is the only safe alternative. Even though they cannot list these products as being 100% vegan, by choosing one of these options, you are choosing one that has caused the least amount of suffering to our animals (which is what the goal with your stance is) and providing the best nutrition for your baby at the same time.

Regardless of how baby receives nutrition whether it be through breastfeeding or formula, it is recommended that a Vitamin D supplement be provided each day from birth through six months and monitored through the healthcare provider. Making sure that your baby has the proper nutrients for those first six months is ultimately the primary goal.