When will Else Nutrition’s Baby Formula Hit the Market? 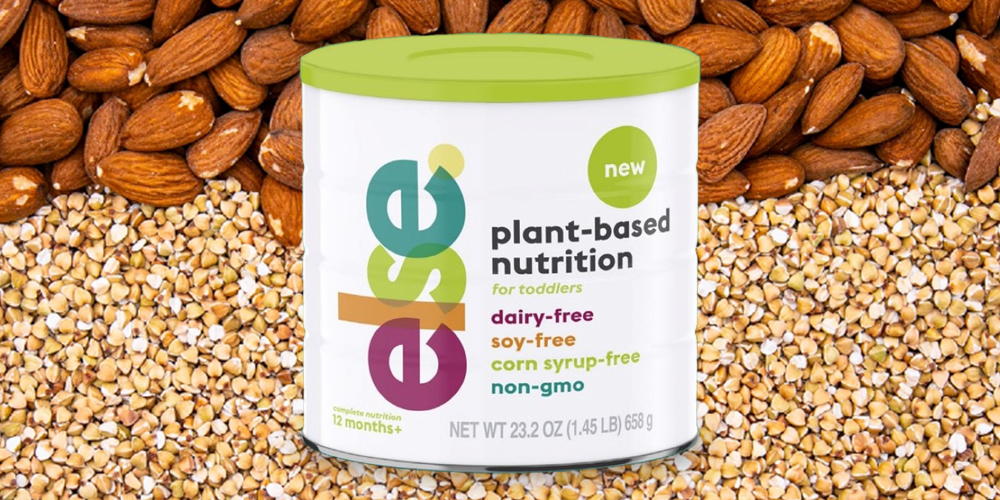 For many new parents, one of the hardest challenges of raising an infant is figuring out how to maintain a vegan diet while making sure the child gets all the nutrients they need to be strong and healthy. Until recently, this was virtually impossible in the United States. So-called “vegan” baby formulas do exist, but while they’re typically based on soy instead of dairy, they still contain vitamin D that was derived from animals. As a result, parents have been forced to either breastfeed their child–which isn’t always an option–or stick with a regular non-vegan formula until their child is old enough to eat solid foods.

Until recently, there were a few vegan baby formula products in Europe, but the wave had yet to hit the United States. Recently, a brand called Else Nutrition appeared on the U.S. market. Else Nutrition vows to offer safe, dairy-free, 100% vegan baby formula that doesn’t have a single trace of animal by-products. Their formula is still in the testing stages, but once it’s released, it’ll be the first vegan baby formula to ever hit the United States. And vegans across the country are excited. Because when Else Nutrition reaches store shelves, vegan parents will be able to raise their children in a completely ethical, environmentally-friendly lifestyle that’s free from the sting of animal cruelty.

What is Else Nutrition?

While the name might not sound familiar, Else Nutrition has actually been in development for the past seven years. The idea came to one of the founders when his granddaughter fell ill and couldn’t ingest any of the dairy- or soy-based formulas on the market. When he gave her an old family recipe that was based on almond paste, she began to recover and transformed into a healthy, thriving child. He started to realize that if she could survive on almond-based formula, surely other children could survive on it as well. As he and the other founders studied the compounds in breast milk, they realized that almonds actually offered similar compounds and nutrients. With that in mind, they began developing a brand that would revolutionize the formula industry: Else Nutrition.

Other brands have claimed to offer vegan alternatives to baby formula. These products might be soy-based instead of dairy-based, but they still contain trace amounts of animal products, as well as chemicals and artificial hormones. When it’s released, Else Nutrition will be the only formula on the market that’s actually 100% vegan, as well as free of chemicals, antibiotics, and artificial flavorings. Their ingredients are sustainably harvested from almond farms in California. Their products are ethical, all-natural, and environmentally-friendly, making Else Nutrition a wonderful way for vegan parents to welcome their new baby to the world.

Else Nutrition baby formula is also a great option for the parents of children with certain illnesses or allergies. Soy-based formula is typically touted as the safe alternative for lactose intolerant children, but if the child also has a soy allergy, their parents find themselves scrambling to figure out what to do next. Else baby formula is completely free of soy, gluten, and other ingredients that could cause an allergic reaction. Almond allergies are possible, but they’re the least common of all nut allergies.

In addition to the baby formula, Else Nutrition also offers a plant-based drink for toddlers that’s loaded with vitamins and nutrients. A plant-based drink might not sound particularly appetizing, but the drink is naturally flavored with sugar and almond paste to create a mildly sweet flavor that even picky eaters love. The drink comes in a powdered form that can be stirred into a glass of water. Like the Else Nutrition formula infant, the Else Plant-Based Complete Nutrition for Toddlers uses almonds and buckwheat to form a nutritious, protein-rich drink that can easily become part of your child’s daily routine.

Despite still being in the testing stages, Else Nutrition’s products have been favorably reviewed by multiple nutritionists and pediatricians. The Global Food Innovation Summit awarded Else Nutrition the coveted “Best Health and Diet Solutions” title in 2017.

What Are Else Nutrition Products Made Of?

Have you ever read the back of a baby formula label and found a list of chemicals that you can’t even begin to pronounce? Else Nutrition aims to make a digestible, nutrient-rich formula that uses only a few pure plant-based ingredients, rather than chemicals and additives. The base of their formula is almond butter, which offers a rich amount of protein as well as various nutrients like vitamin E, magnesium, phosphorous, copper, and riboflavin. The almond butter is complemented with buckwheat, a gluten-free plant that’s crammed with nutrients, and tapioca, a natural form of carbohydrates. Else Nutrition’s ingredients are all extracted from plants that were harvested directly in the field–not plant-based oils or plant by-products.

In addition to the baby formula, Else Nutrition also offers a plant-based nutrition drink made from the same ingredients. The only main difference is the addition of a slight amount of sugar, which makes the drink sweeter and more palatable for toddlers. But the drink is still made from three natural ingredients–almond butter, buckwheat, and tapioca–as well as vitamins and minerals that keep your toddler happy and healthy. The drink also comes with the necessary amount of calories and fat to give your child energy and help them process the nutrients. It’s basically a quick way to give your child the vitamins that they need without having to fight with them over their eating habits.

When Will Else Nutrition’s Products Be Available On the Market?

Else Nutrition has actually started offering free samples for their Else Plant-Based Complete Nutrition for Toddlers drink. Eager parents can order the samples from the Else website and have them shipped directly to their house. As far as the official commercial version, it’s about ready to hit the local store shelves. Once the certifications have been processed, you’ll be treating your child to a delicious vegan drink in no time.

Despite the hype surrounding the product, the vegan baby formula still has a few years of testing to go before it’ll be ready to hit the marketplace. Else Nutrition is currently being tweaked and formulated to make sure it’s the best, healthiest possible version of the product. The product will later undergo clinical trials to ensure that it’s a safe alternative to traditional baby formulas. Once the product has passed its trials, the FDA will evaluate the formula and study each ingredient individually. Else Nutrition currently anticipates that this process will take at least three years. It’s a long process, but Else Nutrition is committed to ensuring that their baby formula meets the strictest safety standards in the industry.

How Can I Stay Up-To-Date on Else Nutrition Baby Formula?

If you’re a vegan parent, you probably can’t wait to buy Else Nutrition Baby Formula. Unfortunately, the product still has a few years of trials before it’ll be ready for the mass market. If you want to stay updated on all Else Nutrition baby products, make sure you’re following the topic “baby formula.” You can also sign up for our newsletter and be the first to know when Else Nutrition hits the store shelves, as well as other great brands that’ll revolutionize your vegan lifestyle.